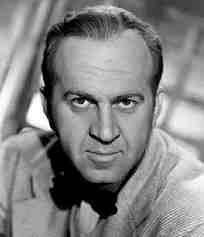 I mentioned in my introductory post how discovering a great new classic film can feel like waking up to Santa's bounty on Christmas morning.  Great films, charismatic stars, and talented directors all create this effect, but it doesn't end there.  I've found pleasure in getting to know terrific character actors who show up over and over in films during specific time periods, or at a particular studio.  One of these is Howard Da Silva (1909-1986) who has astonished me by the versatility of the roles he played, all with exceptional skill. This plain man of average build bounced back from a major career set-back as one of many movie people black-listed by the House Unamerican Committee (HUAC) during the Communist witch hunt era.  What he lacked in movie star glamour, he made up for in spot-on characterizations, deep commitment to his roles, and a wonderful deep resonant voice.

Da Silva was born Howard Silverblatt in the U.S. to Russian Jewish immigrant parents.  When he became an actor he changed his surname to Da Silva, a very common Portuguese name, yet oddly he had no connection with Portugal. His chosen name had the benefit of being distinctive and memorable, in any case.  He launched his acting career on the stage, progressing to significant parts on Broadway, including musical theater.  His film career began in the 40s; in that decade alone he had parts in 38 different movies, mostly as heavies.  He was blacklisted in 1951 after refusing to testify in front of HUAC as to his political activities or those of anyone else he knew. Apparently keeping his lips zipped was somewhat uncharacteristic of Da Silva. Fellow actor Robert Taylor, whose words got him that visit to HUAC in the first place, supposedly said "He seems to always have something to say at the wrong time."  The blacklisting resulted in a hiatus from movies, but Da Silva eventually found work on television and on the stage once again. [For more on the blacklisting in Hollywood check out the current series from www.youmustrememberthispodcast.com] He returned to film in the 1960s and gained memorable parts through the early 1980s.  One has the sense that this was a man who was devoted to, and devoted himself completely to, his craft of acting.

Here are the films that exposed me to Da Silva and made me an admirer.  I realize this just skims the surface of his work, and I look forward to enjoying more of his performances.

THE LOST WEEKEND (1945)
An acting showcase for Ray Milland in the role of an alcoholic struggling through an epic bender, this film allows Da Silva to shine in the small part of a sympathetic paternal bartender in a joint Milland's character frequents.  Da Silva has little screen time but dissolves into his role, demonstrating good chemistry with Milland.

THE BLUE DAHLIA (1946)
In this classic noir penned by Raymond Chandler, Da Silva plays Alan Ladd's rival in love twice over (!) -- as Ladd's estranged wife's lover, and the husband of Veronica Lake (whew!).  As character Eddie Harwood, he is also a sophisticated baddie who cuts an elegant figure as the sly owner of the nightclub of the film's title.  He is smooth as silk while narrowly escaping blackmailers, thugs,scorned women, and Ladd's righteous anger. 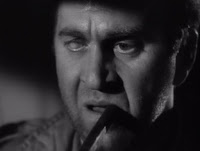 THEY LIVE BY NIGHT (1948)In this film, Nicholas Ray's directorial debut, Da Silva inhabits a character quite different than his cool, dapper Eddie Harwood.  Here he is blustering, one-eyed thug "Chickamaw", who is the driving force behind Farley Granger's life of bank robbery, and can never get his emotions or impulses in check.  We feel threatened by him but also drawn to him as his character is never completely black.  We sense that ultimately, he is a once-decent guy who fell victim to his own bad decisions years ago.  Check out the scene in the video link below.


BORDER INCIDENT (1949)
Ricardo Montalban has top billing in this strong docu-noir about a racket smuggling illegal Mexican farm workers across the border.  Da Silva shows up about 30 minutes into the film, but once again portrays the heavy, this time the menacing head of the smuggling operation.  He's never sympathetic here, and his face and voice dominate the screen when he's setting up Montalban's character for a fall.

TWO YEARS BEFORE THE MAST (1946)
In this Alan Ladd Paramount film, based on the memoir from Richard Henry Dana, Jr., Da Silva plays the tyrant captain of the sailing ship 'Pilgrim' in the late 18th century.  He insists on all manner of economy to deliver under budget for the ship's owner, who happens to be Ladd's father.  After deprivations, the crew finally mutinies and Da Silva must confront this ultimate test.  Pulling some characterization from his Eddie Harwood role, he stands strong and straight, unyielding to those who would get the better of him.  It's Ladd's film, but Da Silva is the one to watch when he's on screen.


THE UNDERWORLD STORY (1950)
I admit to watching this because of Herbert Marshall.  Dan Duryea is the main character and for once, he's the protagonist, albeit a bit oily.  Once again, Da Silva portrays a gangster, this time at odds with the press, represented by Duryea and his love interest, Gale Storm.

1776 (1972)
For something a bit different, I submit this historical musical comedy-drama as perhaps the film that latter-day audiences may best know Da Silva.  He portrays the pompous, humorous, witty, and ultimately courageous patriot Benjamin Franklin, a role which he owned on Broadway for many years.  And, Da Silva can sing and dance!  He is at home in Franklin's skin, and astonishes when he switches from his 'congenial know-it-all' to dead serious in an instant.  It's a testament to Da Silva that he comes up against but never crosses the line into caricature.  It's written that Da Silva was a bit difficult to work with during 1776's run on Broadway, and director Peter Hunt did not want to work with him in the film; he got the part once he promised to "behave," and, apparently he did!  If you've not seen this film, you can watch the clip below to get a sense for it -- here, Ken Howard, Da Silva, and William Daniels (as Thomas Jefferson, Franklin, and John Adams) tunefully debate what bird (!) should represent the nascent U.S. of A.

Radio -- CBS Mystery Theater
With his great voice, Da Silva made quite a number of radio shows, including a regular appearance on CBS Mystery Theater.  Check this one out from 1976 -- Da Silva uses the full range of voice to create the conflicted policeman Harry in the drama 'The Smoking Pistol 565.'

[THE LOST WEEKEND is showing on TCM on April 9 at 8PM EDT].
Drop me a line mentioning other Da Silva films you'd recommend!
Jocelyn at 1:44 PM
Share